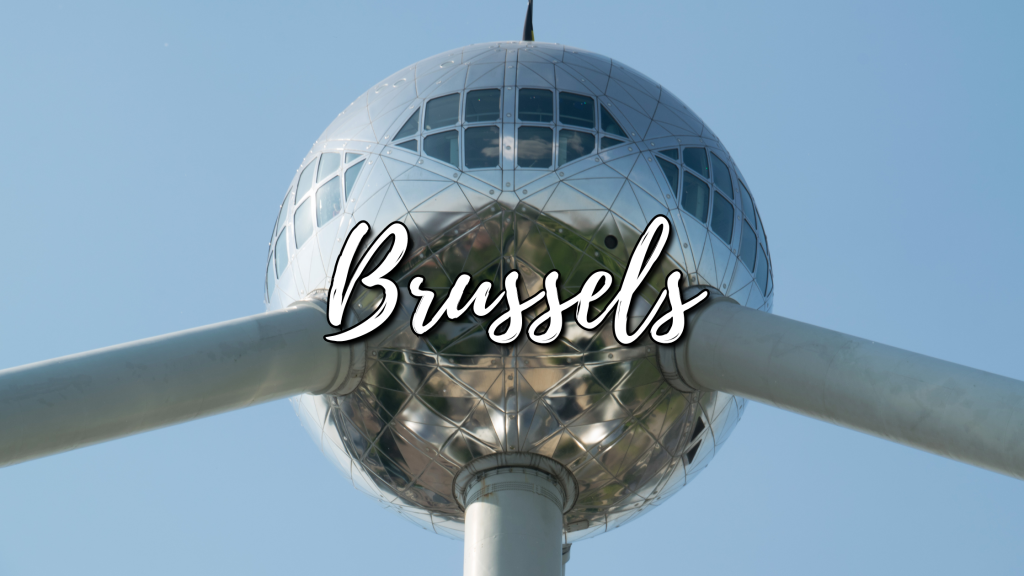 My dance with Belgium is pretty much a play-by-play example of what not to do. I’ll go into depth throughout the post, but here’s the tldr; I was cheap and flew into Charleroi. Spent the night in an awful Airbnb and took way too long to actually get to Brussels the following morning.

Basically, I lost precious hours I could’ve spent exploring the area. Some things are worth cheaping out on. This was not.

For what it’s worth, I feel like Brussels treated me well. I saw and did a lot during my time there. I’d love to return someday.

Brussels is sort of the city center of a lot of what’s happening in the world. It’s the the de facto capital of the European Union and home to many other important international organizations. Belgium as a whole seems to be known for many a food too (we’ll get to that in a bit), so it’s almost like stepping into an international hub of culture and cuisine. Arrive hungry.

How to Spend 3 Days in Brussels

When to Go to Brussels

March – May or September – October

Brussels is one of those “4 season environments.” Rain is always going to be an issue, but March – May and September – October tend to be pretty mild. I’d recommend paying attention to the weather before you travel, the city has much to see on foot.

Where to Stay in Brussels

Not at the Airbnb I was in. Hahahahaha

… but seriously, friends of mine spoke highly of MEININGER Brussels, a former brewery turned hostel. Very close to Grand-Place and other attractions, while still being clean and affordable. Tell me all about it if you go, I’d like to deepen my regret a bit.

How to Get Around in Brussels

The Brussels Metro is pretty comprehensive, but aside from traveling from city to city, you won’t really need it. All of the major Brussels sights are within walking distance. If you stay in the city center, your transportation is your feet.

Where to Eat in Brussels 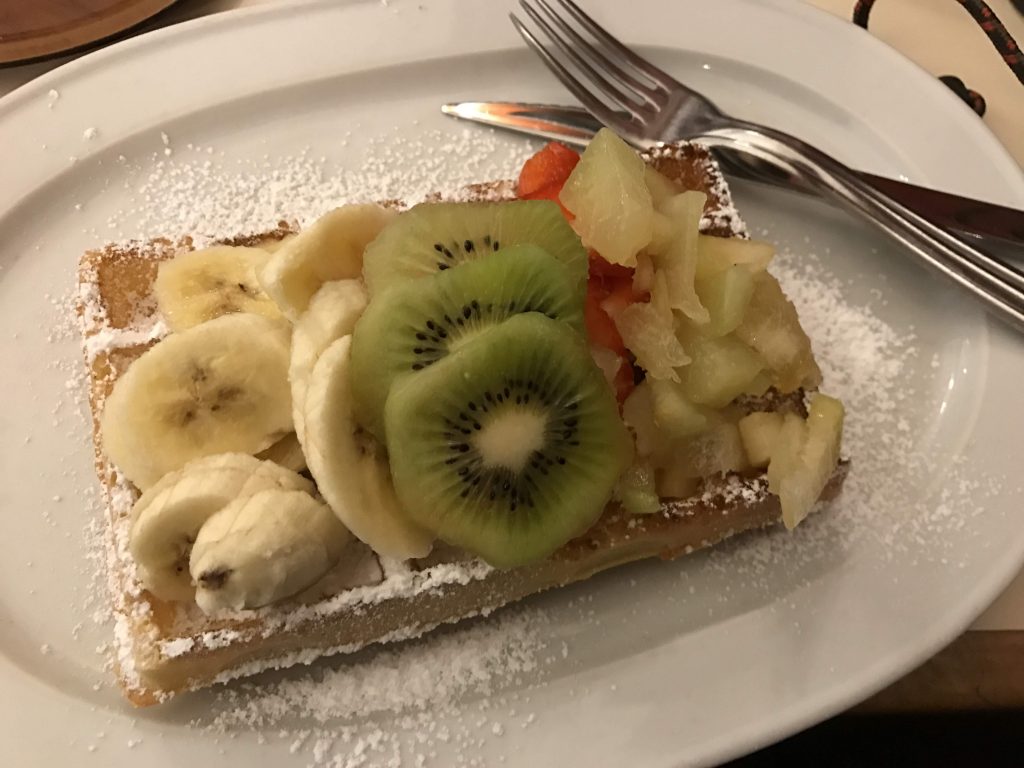 Belgian waffles are an absolute treat. Try to make it a breakfast meal if you can. I ate at Mokafé, but also hear from locals and tourists that Maison Dandoy is fabulous as well. It depends on what experience you’d like.

Mokafé is inside the Galeries Saint Hubert, Maison Dandoy has a few locations, the top being Grand-Place. Can’t go wrong either way. I’d just caution against getting a waffle on a stick; rarely if ever are they made traditionally, and they’re so piled with stuff you can’t really taste the waffle in the first place.

Fries eaten “Belgian-style” will prompt a whole “Why hasn’t the whole earth adopted this method?” crisis. They’re really something. Double-fried for the ultimate crunch and taste, you can find them almost anywhere. I had Belgian-style fries at a street market, but Fritland is a shop that is frequently referenced and easily found.

Tonton Garby should be your #1 stop. Go to his shop more than once if you can, I really wish I had. It sounds pretty basic; a sandwich shop run by one man. But… Tonton Garby is the hero we need and not the one we deserve.

He’s one of the few on this earth who really, really loves their job. And he wants you to love his sandwiches as much as he enjoys making them. Watching him make my tomato and cheese sandwich was like watching art.

Remember that episode of “Spongebob SquarePants” where Spongebob is in a Krabby Patty competition and takes his sweet time making one perfect burger? Yeah, it’s like that. Budget time accordingly, this shop attracts quite the crowd.

Day 1 of 3 Days in Brussels 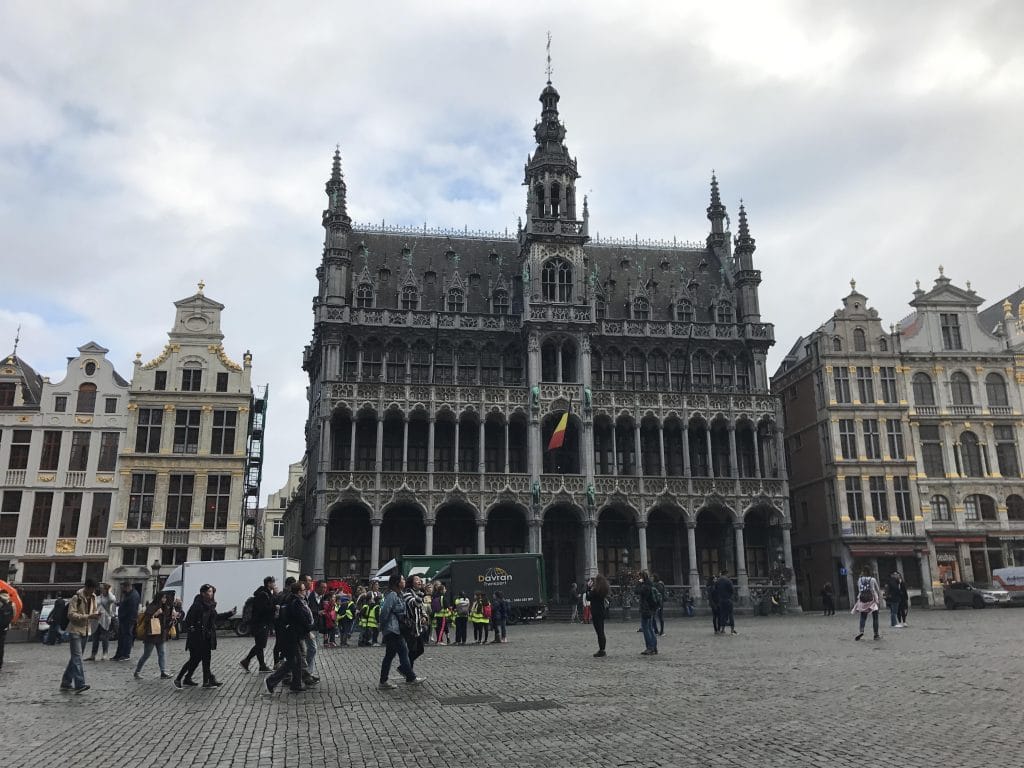 I started my day walking through Galeries Saint Hubert, a shopping center with striking similarities to Galleria Vittorio Emanuele in Milan. The ceiling is a curved glass structure, and it’s beautiful. You could absolutely stop by later in the day when more shops are open, but I really enjoyed the quiet, near-empty space. It was a bit surreal.

Free walking tours tend to be hit or miss, but the Sandeman’s Free Walking Tour absolutely nails it. Simon, a Belgian native, was my guide, and our group had a fabulous time. He’ll take you to all the major stops, I’d recommend booking the earliest tour (10 a.m.) which will give you ample time to explore afterward.

Grand Place is where you’ll end up before your tour starts. It’s an architectural marvel. Brussels knows their stuff when it comes to building impressive places.

You’re looking at the Museum of the City of Brussels, looking very gothic and ornate. Then you can walk underneath the Town Hall. It’s a pretty neat place for photo ops.

At some point, you’ll come across Église Notre-Dame du Sablon, it very much gave me Notre Dame in Paris vibes. It’s impressively built and gorgeous inside and out.

Mont des Arts is a public park that gives a wonderful view of Brussels. It’s a good place to take your lunch and walk around to take in the scenery.

Musées Royaux des Beaux-Arts is an art museum that’ll have something for everyone. It incorporates modern art (not for me) with ancient art (yes, please!) and seamlessly tells the story of how each medium came to be.

Make sure you give La Monnaie De Munt a visit, whether for a building tour or a show.

Day 2 of 3 Days in Brussels 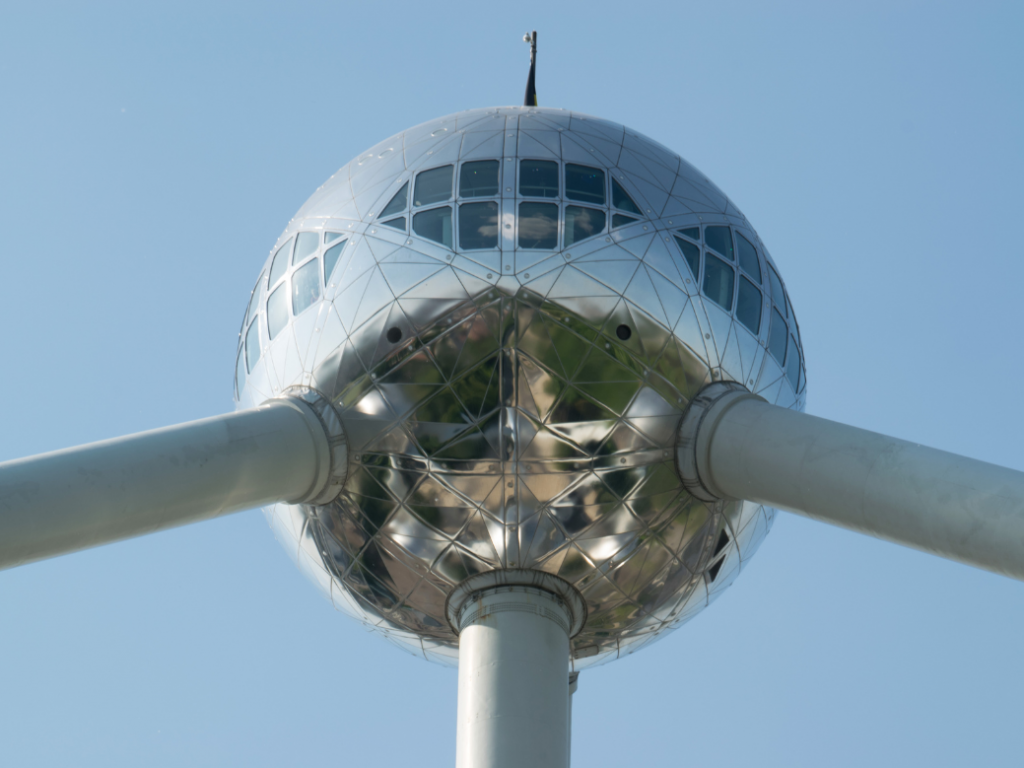 Now that you’ve a got a feel of Brussels and how to get around, it’s time to put that to the test.

Perhaps the most fun element of this city is its unabashed love of comic books. How does this manifest? Street art. Anywhere and everywhere. The Comic Book Route has an overwhelming amount of murals at their best. If you wanna hit it all, it’d be best to budget a day-ish.

While there are several walking tours that can take you to the best and most popular works, you could also explore on foot. Like, I said Brussels is super walkable. If the weather is right (or even it’s not) get out and get your street art fix.

Considered a symbol of Brussels, the Atomium is a series of exhibitions connected by escalators, overlooking a beautiful park.

It’s a bit out of the way of the city center, but you can take the 3 line from Grand Place and be there in about 40 minutes.

Day 3 of 3 Days in Brussels

Bruges is a super cute city that’s only an hour away by train. Check it out! It makes for a perfect day trip. 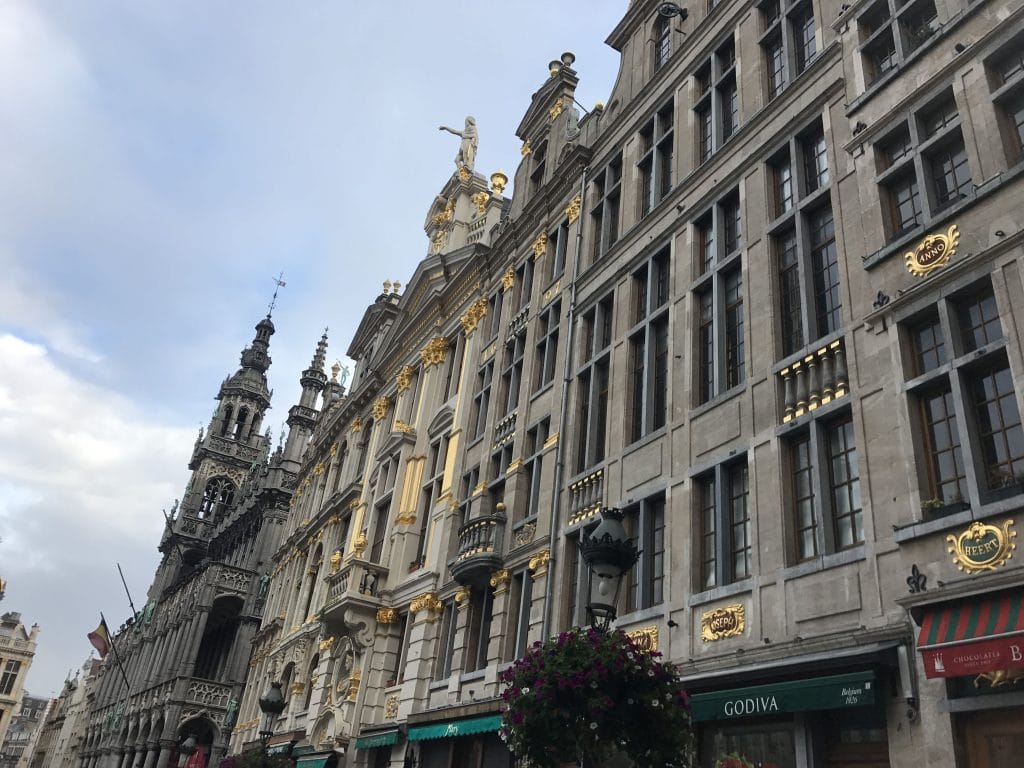 The Manneken Pis is…tiny. Don’t worry about it if you miss out on seeing it.

Always bring an umbrella, too. Odds are, you might need it. 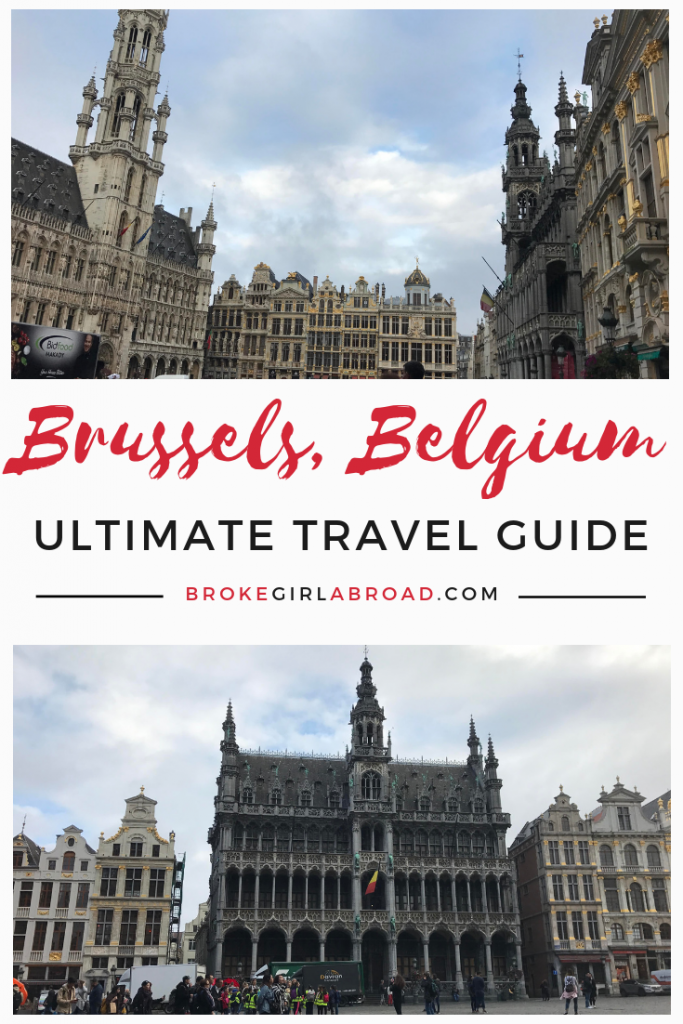 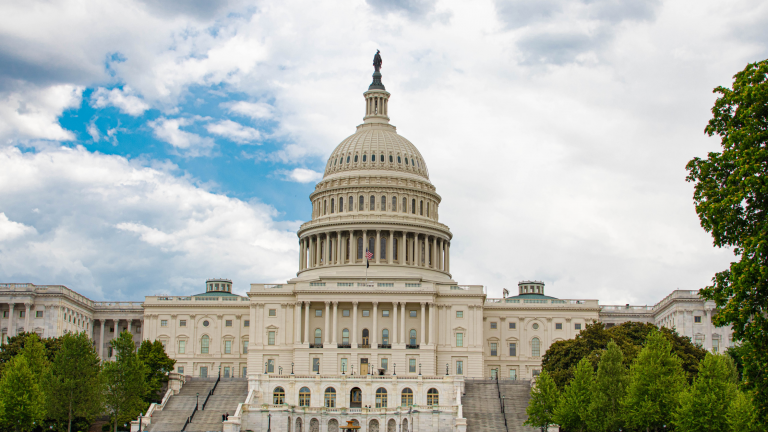 This makes me so excited for my upcoming trip to Belgium! I can’t wait to eat delicious food and walk around the parks and comic book routes!